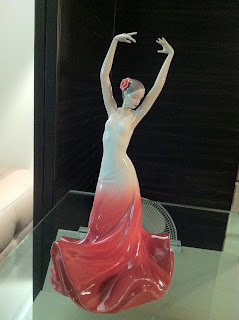 After two restaurant meals (at Royal China and at Yautcha), we decided it’s time to bring Ladies Who Lunch back home. And what a comeback!! Deepa Navani and Maleeka Lala treated us to the most delicious and refreshing Spain-inspired meal. And showed us how a simple, restrained and classc menu, focussed on a few good quality ingredients, can be so satisfying and memorable. Deepa’s scrumptious tapas left just enough space to enjoy Maleeka’s generous, delicious paellas. All washed down with glasses of Maleeka's white wine sangria with an Indian twist: oranges, limes, amla, mint and tulsi! The grand finale - churros! Yum!! 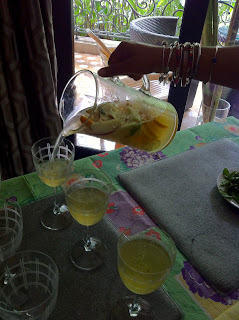 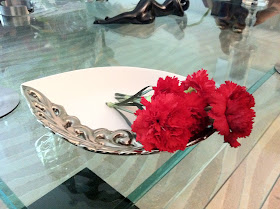 It’s only later that I truly understood the amount of preparation it took, and most of all the careful and no-compromise selection of produce, responsible for the fresh, uplifting flavours we experienced.

Maleeka and Deepa both vacationed in Spain this summer and came back armed with unforgettable gourmet experiences. “The Spanish drink and then they drink some more.  There's a tapa or two followed by more drinks. The big meal is served family style. The louder the better. The more the merrier.  Food (and drink moreover) is FUN,” remembered Deepa. “I also loved the fact that everyone's involved in the cooking process and of course, there's always some Rioja in hand. While in Spain, I was cooking alongside my sister, brother-in-law, brother, kids and whoever else was there.”

To Maleeka, “Spanish cuisine is one of my favourite cuisines in the world, for its depth
and ingenuity. My parents, Kanta and Rafiq Lala, my aunt, Bindu Mahtani, and their close friends, Marijke and Fudli Talyarkhan, cooked us authentic Spanish meals for as long as I can remember, in our beach house in Alibag and in Spain. Their constantly evolving tapas, paella and lethal sangrias are reminiscent of my happy childhood. We also visited Spain as children and teenagers. In July, I spent a week in Andalucia with some friends and met Deepa for lunch the day I reached Marbella. She and I enjoyed a fabulous meal and decided that we would team up to produce a tapas and paella meal for our group. This lunch is not only dedicated to fabulous Spanish food, but also to the warm and welcoming locals who made me feel more at home than I do in Mumbai!”

But of course, great memories are not enough to replicate a local cuisine. It certainly helps that Maleeka and Deepa are both incredibly talented and passionate home cooks. I have still not forgotten Deepa’s baked camembert and mango dish that she brought at Aisha’s mango inspired lunch, and after tasting her tapas and seeing her incredible high-tech kitchen, I can’t wait for her to feed us some more.

Maleeka’s home dinners are legendary. She cooks everything herself, even if the guest list runs for more than two pages, beautifully setting the table in her vintage china-lined dining room. Most recently, she converted the most boring vegetable - zuccini, into a gourmet treat, pairing it with roasted almonds. And yes, dessert was several flavours of panacotta set in beautiful wine glasses. The only grouse I have with her? She gets so engrossed in the cooking and plating process, that she has no time to join her guests and we rarely enjoy her undivided attention and company.

But let’s not deviate and get back to our Spanish lunch!

It was hosted at Deepa’s brand new home, and she had managed pretty well to create an atmosphere with Spanish music, lots of flowers and a dress code of polka dots and frills. We were greeted with a huge glass jug full of refreshing sangria (an instant mood lift) and bright red carnations to put in our hair. One look at the menu and we knew we are in for a treat: 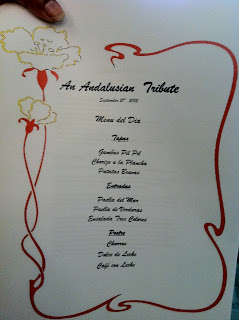 Gambas Pil Pil, in all their oily glory, were served in a fondue dish, accompanied by Indian pav bread. You eat, and then you dip. And dip some more. And more. The oil was sinfully delicious, infused with the flavour of the prawns. “While I was in Spain, gambas pil-pil was by far the summer fav,” explained Deepa. “The bread was very very different from anything that we get here in Mumbai.” But we all found the Indian buns to be the perfect substitute! 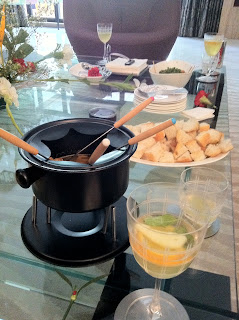 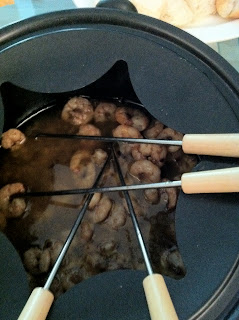 The chorizo (brought over from Spain and frozen) was a hit of flavour, spicy, glistening and crunchy. Softened down with the perfectly cooked potatoes (patatas bravas). And I can tell you, these patatas bravas were hundred times better than the ones I have tasted in restaurants in Bombay. 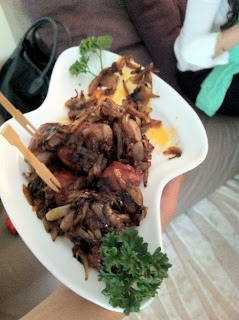 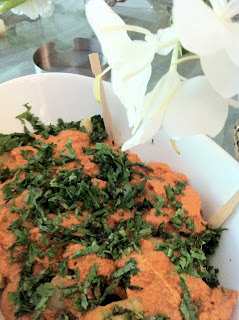 Maleeka, being the free spirit that she is, did not serve us paella from a recipe. Instead, we did a Ladies Who Lunch first - we had a cooking demo. As we all gathered in the kitchen, my attention was immediately drawn to the beautifully prepped fresh vegetables, the sparkling bowls of raw seafood, the containers of sweet paprika and saffron, and the perfect green herbs. 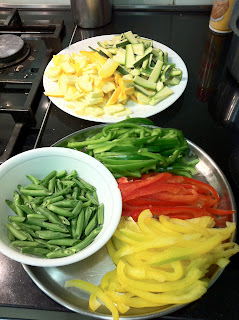 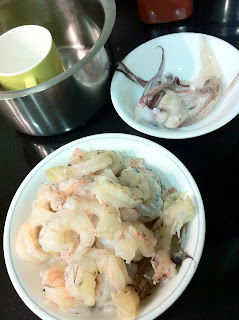 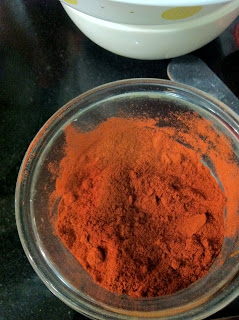 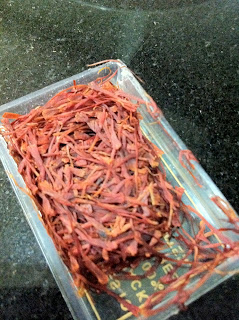 A huge pot of stock was bubbling on the stove (apparently it was simmering there for the last few hours), containing the chicken carcasses and the prawn shells, filling the kitchen with the most incredible aroma. Onions, avocados, tomatoes and mozzarella were being cut and arranged, spices were being sauteed in huge iron skillets, rice was being boiled. Heaven!! 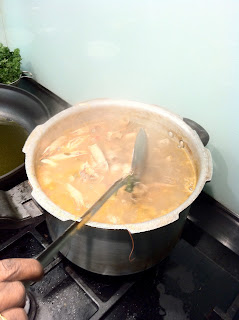 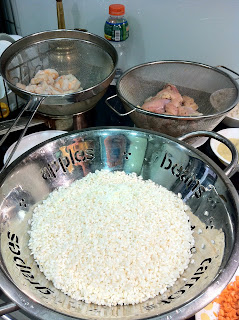 Maleeka assembled the paellas by first pan frying the rice and onions, adding the herbs and spices, then gradually stirring in the stock. The delicate fresh vegetables and seafood were added last. 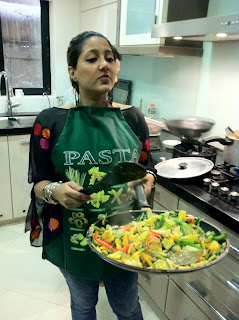 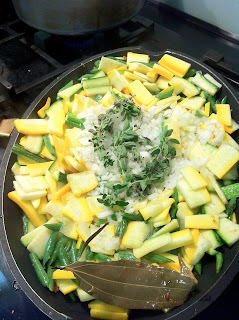 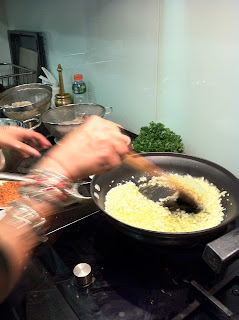 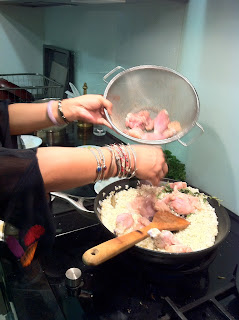 Lovely, generous, beautifully plated paellas. We were so ready to dig in!! And we chatted and laughed so much, without a doubt aided by the generously flowing sangria. 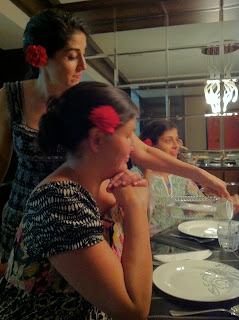 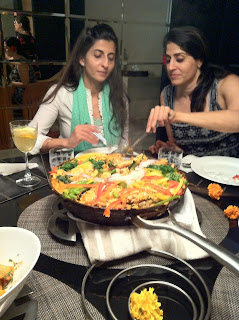 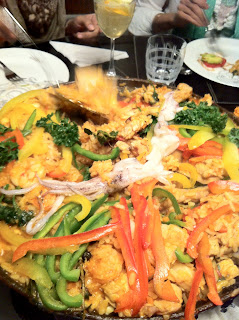 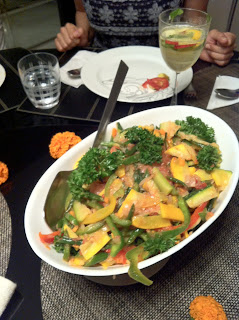 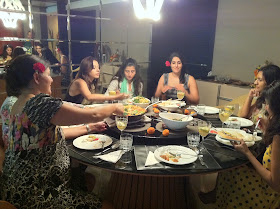 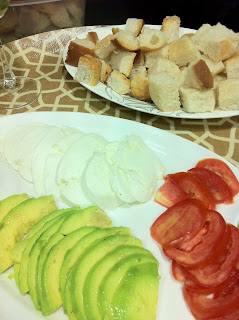 Dessert, served in the TV room, were beautiful crunchy churros with chocolate sauce and Dulce de Leche ice cream. “The cinnamon sugar churros are more common in the summer heat and the plain churros with thick warm chocolate in the North (or colder months),” said Deepa. “The batter is very very thick and I could not find a piping bag strong enough to make long winding churros. A makeshift press worked nicely and I think we all got the idea. Especially lovely were the three attempts made by my daughter to perfect the batter and then get the piping strategy sorted out! Lots of churros were consumed during the experimentation stage!” 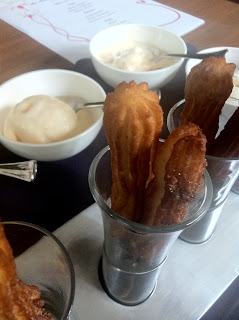 I asked Deepa and Maleeka to share some of their insider tips and tricks of eating in Spain and hosting a Spanish meal:

WHEN IN SPAIN...
--> On the coast, the best restaurants are the beachside (water side) ones that serve family style seafood dishes. Tikitano outside Puerto Banus was by far the best.
--> That they really do eat every part of the gamba / fish.  In general, they waste nothing.  Even dried up bread has some use the day after.
--> Using the best possible olive oil is essential in Spanish cooking.
--> As a rule, when travelling, Maleeka studies the cuisine and best restaurants of the region in depth, “so that in my short time there, I am able to enjoy the best  meals available. This year I studied 'Culinaria Espana', an encyclopaedia of Spanish. I also spoke to family and friends who live there, have lived there or had recetly visited. The Lonely Planet on Spain was another superb guide to restaurants. I chanced upon scrumptious meals wherever I went as, my years in food related industries has fine tuned my instinct to smell the most authentic restaurants in any area. The trick in Spain is to ask for tthe tapas and raciones menu. Some of my best meals were in Ronda, a beautifully quaint white town; the paella at my aunt Mira Kripalani's home in Toremolinos; a funky tapas bar in the heart of Madrid; all my meals in Sevilla in the Santa Maria district around the stunning catedral."

SPANISH SHOPPING IN MUMBAI:
--> The vegetables (including the avocados and white onions) were hand-picked by Maleeka from Pick Point in Colaba Market, a vendor who has been supplying her family for the last 20 years. “I find the quality of their vegetable far superior to those anywhere else.”
--> The seafood was ordered from Pesca Fresh (http://www.pescafresh.com). “They will give you the peels, head etc. to make the seafood broth but pickup is always best because their delivery is unreliable if time-pressed,” recommends Deepa.
--> You can substitute Spanish saffron with Kashmiri, widely available in Bombay.
--> The arborio rice, port wine vinegar and paprika wehere from Uncle's Shop at Crawford market.

Preparation:
Preheat oven to 375F. Place a baking sheet inside.
Heat a tbsp of oil in a small pan over medium heat. Add onion and garlic and cook for 5 min. Add paprika, cook for 30 sec. Let cool slightly.
Combine the onion mixture, mayonnaise, tomato, pepper sauce and vinegar in a food processor. Process until smooth. Season with salt and pepper. Scrape the mixture inside a bowl, cover and refrigerate for at least 30 min to allow the flavours to meld.
Heat 2 inches of pure olive or canola oil in a large, high-sided, heavy-bottomed skillet until it begins to simmer. Add the potatoes, season with salt and pepper and cook until golden brown on all sides. Remove the potatoes into a towel-lined plate for a moment to drain the excess oil. Carefully remove the hot baking sheet from the oven, put the potatoes on the pan in an even layer and bake until crisp, about 10 minutes. Remove the pan and season the potatoes with a bit more salt. Transfer to a platter and drizzle with some of the aioli. Garnish with parsley leaves. Serve hot.

Preparation:
Shell, devein shrimp, keeping the tails intact. Mix with the salt in a large bowl, cover and refrigerate for 30 min. Heat butter and oil in a flameproof dish over medium heat. When foaming, add garlic and chili and cook for 3-6 min, or until they curl up and change colour. Sprinkle paprika and serve sizzling hot with plenty of bread for dipping.

Preparation:
In a small saucepan over medium heat, combine water, 2 1/2 tbsp sugar, salt and 2 tbsps vegetable oil. Bring to a boil and remove from the heat. Dtir in flour until a ball is formed. Heat oil for frying in a deep fryer or a deep skillet to 375 F. Pipe strips of dough into the hot oil using a pastry bag. Fry until golden. Drain on paper towels. Combine 1/2 cup of sugar and cinnamon. Roll churros in the cinnamon and sugar mixture. Enjoy with ice cream and chocolate dipping sauce (optional).